SNEAK PREVIEW - A special viewing of the show will be held on Wednesday, March 14th, at 4:00 pm
February 7, 2012, Chicago.  A famous Ansel Adams photograph has inspired members of the Wilson Artists’ Group to create their own painted versions of it.  “The Tetons and the Snake River” is a classic of Adams’ art.   Taken in 1942 for the Federal Government as part of a commission for the Department of the Interior, the image is in the public domain and free to be reproduced.   The photo was selected to be one of 115 images of Earth that were recorded on a golden disk and sent into space on the exploration module “Voyager.” 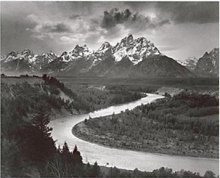 “The Tetons and the Snake River,” Grand Teton National Park, Wyoming, 1942.  Ansel Adams for the DOI.
About the Exhibit:
A studio discussion among the Wilson Artists’ Group one day led to the idea that if everyone painted from the same source photo, the results were bound to be very different, reflecting each artist’s unique viewpoint, process and style. Member-spouse Harvey Dytch was enlisted to select a good landscape subject, and he chose the iconic Adams view of the Grand Teton Mountains with the Snake River in the foreground.
The belief was that this photo not only wonderfully captures nature’s grandeur but is also an example of a classically perfect composition.  The winding river in the foreground leads the eye into the scene toward the distant mountains.  It calls to mind Ansel Adams’ favorite Gaelic prayer, “I know that I am one with beauty and that my comrades are one. Let our souls be mountains, Let our spirits be stars, Let our hearts be worlds."
Given this photographic icon of American natural beauty, the artists faced the challenge of re-interpreting it in a meaningful and personal way.  They could change the black and white to color; they could add texure, alter sizes, manipulate tonal values, reduce forms to lines or shapes…the possibilities were limitless.
Participating artists are: Ann Ponce, Bonnie Zak, Fran Mazur, Kate Tully, Laurie Davidson, Margaret Tully Nicosia, Mary Barnes Gingrich, Meredith Dytch, and Patricia Larkin Green.
Posted by fearlesspainter at 12:03 PM No comments: 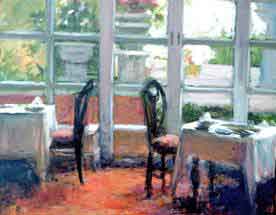 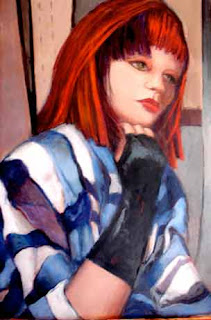 Two new paintings by Margaret Nicosia Tully!
One In the spirit of Tamara de Lempick.
The other an Irish Cafe.
Posted by fearlesspainter at 8:53 AM No comments:

Listed as one of TOP Five Things to do in Ravenswood during Chicago Artists' Month!
The Wilson Artists’ Group explores Chicago Artists Month’s theme: “Artful Networks.”
October presentation highlights the value of community and interaction among artists
The Wilson Artists’ Group will present “Painting Together – How We Grow as Artists,” an exhibition of paintings by all ten members with three artist talks, open to the public.
The events will be held at the Ann Ponce Studio, 1819 W. Wilson Avenue, Chicago.


“Painting Together – How We Grow as Artists,” presented by The Wilson Artists’ Group, is part of Chicago Artist’ Month 2011, the sixteenth annual celebration of Chicago’s vibrant visual art community presented by the Chicago Department of Cultural Affairs and Special Events, and the Chicago Office of Tourism and Culture. For more information, visit www.chicagoartistsmonth.org
Posted by fearlesspainter at 12:10 PM No comments:

The Wilson Artists’ Group explores Chicago Artists Month’s theme: “Artful Networks.”
October presentation highlights the value of community and interaction among artists
July 17, 2011, Chicago.  The painters of the Wilson Artists’ Group have long thought of themselves as an “Artful Network,” so the Chicago Artists’ Month 2011 theme feels tailor-made for them.  During the month of October they will present “Painting Together – How We Grow as Artists,” an exhibition of work and three artist talks, all open to the public. The exhibition will consist of work by all ten members of the Group. Also, Ann Ponce will discuss how an artist critiques a painting, Meredith Dytch will discuss how her growth as an artist has been dependent on painting with, and learning from, her fellow artists , and Patricia Larkin Green will talk about the value of being part of an artistic community. Ms. Ponce says, “We want to demonstrate how beneficial it is for artists to work together, using our own group as an example.”

The events will be held at the Ann Ponce Studio, 1819 W. Wilson Avenue, Chicago.  The schedule is:
Saturday, Oct. 1st and Sunday, Oct. 2nd:  Exhibition, from 11 am. - 6 pm.
(In conjunction with the Ravenswood Art Walk)

Posted by fearlesspainter at 1:21 PM No comments:


Join me at an artists reception

Artwork chowing thru Sept. 30th
Posted by fearlesspainter at 8:51 AM No comments:


Paintings by WAG artists Ann Ponce,  Meredith Dytch and Patricia Larkin Green are seen on the air on Chicago Tonight story. WTTW Chicago Tonight Story about Ameya Pawar highlights OpenWall! Ash-har Quraishi profiles Ameya Pawar of the 47th Ward and he gives a shout out to OpenWall!
Posted by fearlesspainter at 10:25 AM No comments:

Some unsold pieces from Ann's Joffrey Ballet series are available. Here's a sampling: 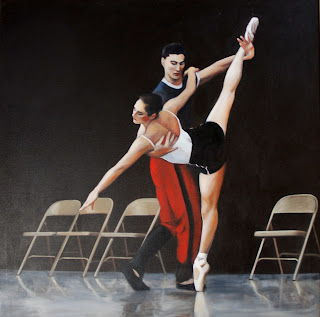 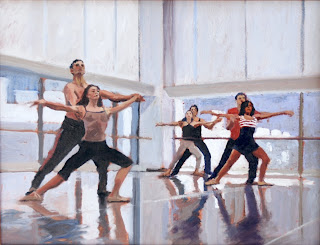 "Six Dancers Rehearsing for "After the Rain""
Oil on panel
14x20
Posted by fearlesspainter at 3:15 PM No comments: